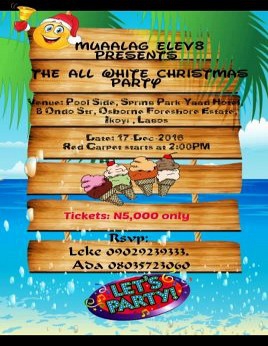 The All White Christmas Party

This annual event which has become a culture for MUAALAG is to further promote the theme for the year, ‘’Elevating network’’ (MUAALAG ELEV8) and also round up what has been an exciting year for the Alumni Association in Lagos. This was disclosed by the president of the Madonna University Alumni Association Lagos chapter, Mr Ogho Emore who spoke at a function held recently in Lagos.  Mr Emore stated that it has been a year of many firsts for the body and expressed delight that the activities carried out through the year has seen numbers in membership swell considerably. He said ‘’ When you look at where the alumni was a few years back and where we are today, you cannot help but appreciate the work of people in the past and present Exco and most importantly the members of the association who have demonstrated passion in dedicating time, expending resources and employing expertise to take the Alumni Association to the next level. Now people want to take ownership of the Association as we have consistently communicated value and inclusion to Alumni of Madonna University resident in Lagos’’.

The celebration which signals the end of the Calendar year for the association, will have in attendance people from different works of life unifying under one association to end the year on a high note. Spokesperson for the association, Mr Elvis Esharegharan echoed the sentiments of the president. In his words, ‘’ Today the drivers of the association and its activities come from within the membership. This is a departure from the previous behavior where the Exco initiated most of the activities. We are proud to talk of a growing network which consists of a core group of more than 500 intellectually gifted individuals united under one umbrella MUAALAG’’ .  Mr Elvis who also spoke about the upcoming event, informed that over the years, the association had consistently varied its end of the year activities to keep its members suitable entertained. ‘’ We started out from the beach and moved to La Mango. Last year we held our First Dinner and Awards night, the first Chapter to do so from the 14 chapters currently in existence. This year we have planned an exciting themed party at Spring Park Yaad Hotel Ikoyi for members of the Alumni and their Families. It promises to be a lot of fun. He urged members to turn out in their numbers as the welfare team has perfected plans to make this affair a memorable one.


In conclusion Mr Elvis called on more brands to identify with the association as the brands already on board have been reaping numerous benefits from supporting the association’s activities.