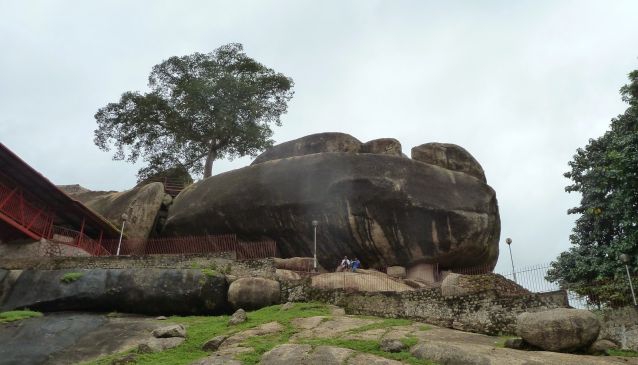 Olumo rock is a spectacular landmark found in Abeokuta, Ogun State capital. The name Abeokuta means 'beneath the rock'as it is situated beneath the olumo rock.

Olumo rock has two meaning to it name. On the site you can find 3 museums that showcases the beautiful artwork of these people, some of their popular adire materials and a restaurant and open barbecue spot.

In order to allow people of different age grade to have a feel of this beauty, the government decided to build an elevator for those who will have problem with climbing the stairs. At the top of the rock, you get a view of the city of Abeokuta and see the houses of some notable Nigerians. There you see the home of Chief M.K.O Abiola a great philanthopist in the history of Nigeria and also the residence and farm of Chief Olusegun Obasanjo the former president of Nigeria. Another remarkable site from atop the rock is the first mosque built in Abeokuta.

Inside the rock you will see footprints of the early dwellers of the place, mat they used in sleeping, their drinking water pot and also shrines where they appease their dieties annually. An important feature of the rock is it pictorial composition, made up of sculptures and coweries planted from the entrance to the summit.

The journey to Olumo Rock is about 45minutes drive from Lagos by road and 1hour 30minutes by train. It is important to note that the rock has never recorded any casualties since it became a tourist site.