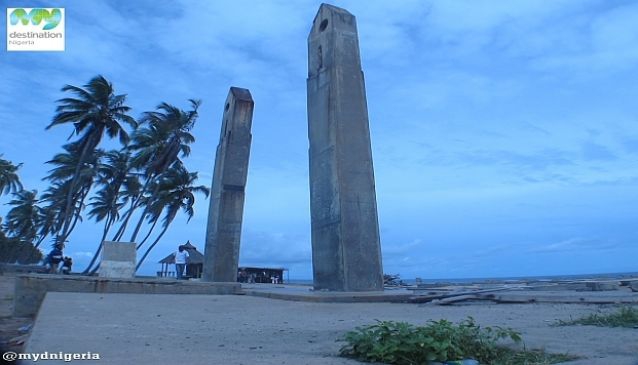 Point of No Return - Nigeria

Directions to Point of No Return

The Point of no Return is what is usually used to describe the Island from where the captured men, women & children sailed away from Africa. The Island today stands as a very enchanting, peaceful, and fruitful Island. The inhabitants are few and can be seen going about their lives either farming, or lazying in the sun. You will see cows graving, children playing games & tourists trekking the 2500 meters to the beach front.

The beach front is where you want to visit as it is yet not populated. It is relaxing, beautiful and fun to be at. You will notice twin pillars/poles/gates as you end the trail the captured slaves took. The captured humans are made to walk in between this pillars (pictured above) maybe as a way of counting them into boats that wait at the beach front. These boats take them to ships waiting farther into the sea.

The 2500m walk from the beginning of the island takes you straight through the Island to the beach front. You will pass 3 sign walls that have been erected to describe events along the journey.

If you continue on the slaves route, you will come across another sign that says 'Original Spot, Slaves Spirit Attenuation Well'. It is known as the Slaves Well of Attenuation.

This well is supposedly bewitched. Legend has it that the captured humans were forced to drink water from the well. They being very thirsty from their wait, and starvation from the confined spaces within the bar-racoons eagerly drank the water. The plot twist here is that as they drank the water from the well, they forgot about home and became docile. This is the explanation given as to why the captured humans couldn't or didn't revolt during the long journey across the Atlantic. It is said that some ships had up to or more than 700 captured humans (mostly able bodied men), and these ships were controlled by a mere 10-15 slave dealers.

Some claim the water must have been drugged instead of bewitched and this was supposed to be a sound reason as to why the captured humans did not revolt during the journey. There are however reports of such successful revolts that happened on the ships. What makes this well story further interesting is the fact (or report) that after drinking the water, forgetting home, becoming docile and zombie-like throughout the journey, the captured humans regained their memory when they reached their destination. This rules out the case of the water being drugged and instead pushes for the well being bewitched.

Further on, you come to yet the 3rd and final sign wall. This sign says 'Point of No Return, Journey to Unknown Destination' and from here, you can already feel & hear the waves on the beach front a few meters away.

Walking back, you appreciate the habitat & natural setting of the place. Maybe someday all of it will be houses & resorts & hotels as the government plans to do something in the future but for now, the Point of no return stands as the place in history where humans were forcefully taken from their homes, loved ones and land to unknown destinations.