The future of Nigeria is not in oil but in Agriculture

The Nigerian economy had once been based on agriculture and the country was virtually self-sufficient in food and crops. However, in 1956 crude oil was discovered and the government moved to redirect investment towards the expansion of the petroleum industry. With the government effectively abandoning agriculture the sector began to decline and many of the county’s farmers slipped into poverty. Nigeria eventually became very dependent on the petroleum industry as the major driver of economic growth. Despite having over 80million hectares of arable land, two of Africa’s largest rivers and a diverse climate where a multitude of crops can be grown Nigeria became a food importing country, spending billions of dollars a year on food imports.
Fortunately in recent years there has been a move by the government to rejuvenate agriculture in order to diversify the economy given the recent stagnation in the petroleum industry. In 2011 the Nigeria’s Federal Ministry of Agriculture and Rural Development (FMRARD) launched the Agricultural Transformational Agenda (ATA), a directive aimed at transforming agriculture into a profitable business sector. The goals of ATA are to transform the agricultural industry in order to ensure food security and to create jobs particularly for youths and women. 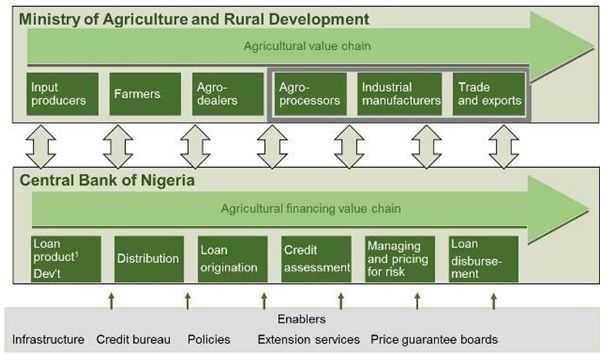 There are a number of investment and redevelopment schemes aimed at ensuring that the goals of ATA are realized. Firstly we have the Nigerian Incentive-Based Risk-Sharing System for Agricultural Lending (NIRSA). This mechanism is designed to alleviate much of the risk banks face lending to the agricultural sector by enabling The Central Bank of Nigeria (CBN) to avail approximately 450billion naira (just over 2.8billion dollars) to farmers through commercial banks.
Next there is the Growth Enhancement Support Scheme (GES) that is designed to support twenty million farmers with agro inputs such as fertilizer. Government will no longer be involved in the distribution of fertilizer cutting out any potential corruption. Several fertilizer suppliers have agreed to commit to the scheme while 15 of Nigeria’s 36states have written to commit themselves also. The Federal Ministry of finance and FMRARD have both agreed to guarantee 70% of the credit of banks participating in the scheme. Finally, following a successful trial in 13 states an e-wallet system has been implement to facilitate financial transactions.
The government has also implemented several policies in Staple Crops Processing Zones in order to facilitate the creation of food processing plants by private sector businesses. Policies implemented include Tax breaks on the import of agricultural processing equipment and increased infrastructure focusing on power, irrigation and transportation.
During the implementation of a Structural Adjustment Programme marketing boards representing farms were scrapped. Consequently several farmers faced several difficulties accessing the market. Therefore, ATA will establish marketing corporations that will be owned by agriculture value chains led by the private sector and facilitated by government.  This will enable more efficient coordination with regards to production and export of target commodities.
Given the number of elaborate schemes aimed at improving agriculture in Nigeria there seems to be a genuine commitment towards redeveloping agriculture in Nigeria. Usually one should be skeptical when it comes to government but that is exactly why the ATA seems to be working as it is diminishing the role of the government and allowing the private sector to thrive on its own. Last year Africa’s richest man Aliko Dangote, agreed to invest $36 in the construction of the continents largest high-energy food processing plant. Other private investors are also beginning to follow suit realizing the profitability of the agricultural sector. Without the government acting as a middleman banks are beginning to lend more to farmers and other agricultural enterprises.
Already major improvements have been made; firstly Nigeria is beginning to reduce it’s yearly wheat import through cassava substitution. Rice production has also significantly increased with Nigeria now producing about 50% of its rice needs. Nigeria is beginning to meet it’s food production and job creation targets with the UN recognizing Nigeria for meeting the first Millennium Development goal halving to population of hungry people 3years early. Moreover, Forbes recently recognized Agriculture Minister Akinwumi Adesina as the Forbes African of the Year. As Mr Adesina has been the mastermind behind the ongoing transformation of Agriculture in Nigeria.
Of course there is still a long way to go before Nigeria is able to fulfill it’s potential when it comes to agriculture but all signs pint in that direction. Speaking at a UN General assembly in New York, Mr Adesina stated that “The future of Nigeria is not in oil but in Agriculture.” This is clearly the case as the petroleum industry in Nigeria is plagued by a number of problems which include corruption, volatility and pollution. However, with agriculture, Nigeria has a sustainable way to continue to expand it’s ever-growing economy and improve standard of living for millions of Nigerians.
Written by:
PUBLISHED: Jun 9th 2017