Must Try Food and Drink in Nigeria

Today there are hundreds of unique dishes that are consumed in Nigeria. Each region has its own array of foods however; a common denominator seems to be the use of many herbs and spices to create deeply flavourful dishes. It is impossible to detail all the different cuisines available in Africa’s most populous nation. Nevertheless, it is important that those of us who plan on visiting Nigeria or passing by our local Nigerian restaurant have an Idea of the best dishes to look out for.
Many Nigerians start their day with a bowl of Ogi a fermented cereal porridge that can be made from maize, sorghum or millet. It is comparable to a western style cereal breakfast and has a similar texture to custard. Due to the fermentation Ogi has a very nice aroma and it tastes slightly sour. The porridge is often accompanied with milk and honey. Ogi will generally be served with a side of moimoi, a steamed bean cake or akara the fried version.
For lunch let us travel to the East of Nigeria and select a traditional Igbo dish called Egusi, a wonderful soup based on melon seeds mixed with a variety of other ingredients. Like most Nigerian dishes Egusi soup is cooked with palm oil and chilli peppers however, there are milder versions and the palm oil can be replaced by a healthier alternative such as sunflower oil. An array of assorted meats will always be added to the soup, which may include chicken, beef, fish, mutton and snail. Dried shrimp or crayfish will always be added to the soup to enhance its flavour in addition to a choice of leafy greens such as spinach or bitter leaf.  Egusi is enjoyed with a number of swallow foods similar to mashed potatoes but based on Nigerian staples such as yam, cassava or rice. A traditional Igbo swallow would be pounded yam, which is prepared by crushing yams into a soft pulpy mass until it has a firm dough like texture. 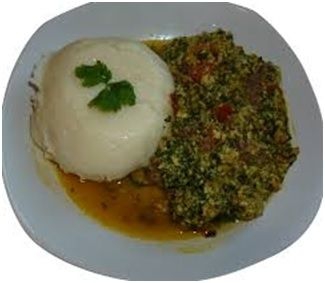 For dinner let us look at favourite amongst the Yoruba people who reside in the southwest of the country. Amala, a dark brow porridge made from the skin of yam or plantain. It is generally considered a lighter alternative to many of the staples in Nigeria, which tend to be dense carbohydrates. Amala is enjoyed with a serving of Palm oil stew, a tomato based sauce cooked in palm oil. The stew can be made with or without meat making it a potential option for vegetarians. The stew is mixed with either Ewedu, a thick and gooey soup made by wilting green mallow leaves or Gbegiri, a bean based soup also cooked with palm oil however, some people do like to mix all three together.

No day is complete without something to snack on between meals. Suya is a nationwide favourite, a skewered beef, fish or chicken shish kebab, originally created by the Hausa people in the northern part of the country. There are hundreds of varieties of spice mixes used to prepare Suya One of the more famous mixes is known as tankora which contains powdered groundnuts, cayenne pepper, ginger, paprika and onion powder. The spice mix is massaged into the meat which is then barbecued. Once it is cooked the Suya is served with a side of onions, tomatoes and an additional serving of tankora. 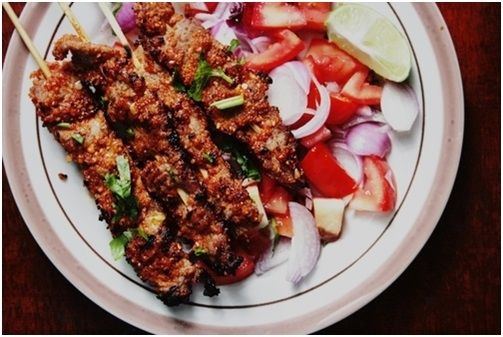 Staying in the north we find one of the Nations favourite drinks, Zobo a spiced beverage made from Rosell plant flowers. The refreshing drink is always spiced with either cinnamon or ginger and is sometimes sweetened by adding fruits usually pineapple. Zobo is healthy, refreshing and truly Nigerian, definitely a must try.
Many people consider Chapman to be Nigeria’s signature cocktail. A mixture cordial (usually blackcurrant), orange soda, lemonade, about a half a shot of Angostura Bitters and a mixture of fruits. It is important to note that the mixture can vary depending on where the drink is being served. The drink is always served with ice and can be garnished with lime, or mint leaves. For those of us who fancy something a little stronger try adding a double shot of Campari liqueur or vodka, perhaps even both if the occasion calls for it.
When it comes to Nigerian drinks no conversation is over without mentioning palm wine an alcoholic beverage created from the sap of the palm tree. Although palm wine is common in many parts of the world it has been a big part of Nigerian culture for centuries often drank during celebrations or ceremonies. Palm wine can be found in abundance, as there are many palm trees in Nigeria. The sap is collected from the flower of the palm tree and then stored and within hours the sap begins to ferment producing an aromatic wine of about 4% alcohol content that has a very sweet taste. The sap can be left to ferment for longer in order to produce a stronger alcoholic beverage or alternatively it is sometimes distilled. Palm wine is embedded in Nigerian culture so in order to have a truly Nigerian experience it is important to try it at least once. 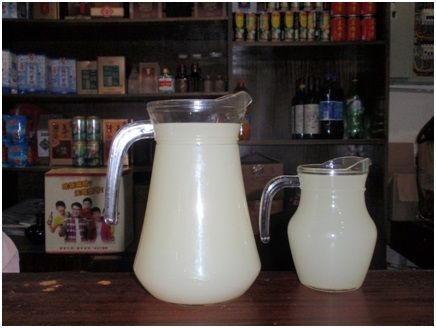 And there we have it a small glimpse into the culinary spirit of Nigeria, as previously stated there are hundreds of other tribes each with their own special dishes, in this article we only looked at three tribes. Given the fact that some parts of the country are still so remote and rural it is plausible to assume that there must be dishes that are still relatively unknown to the general populace of the country. Porcupine, grasshoppers and alligators are some of the more unusual foods that have been mentioned across the nations grapevine, there must be hundreds if not thousands of unique dishes enjoyed in the country today, Nigeria is without a doubt a reservoir of food culture.