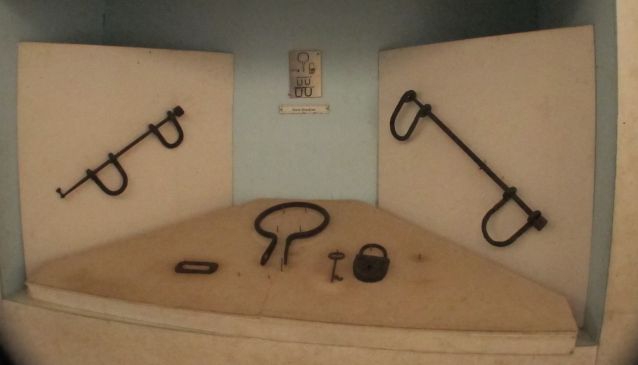 The Badagry Heritage Museum in Badagry is a one storey building that houses the artifacts, records and culture of the Badagry people. Objects in this museum date back to pre-slave era, slave era and post slave era.

The people of Badagry wanting to keep their heritage intact and as a reminder of what happened in their town decided to resist huge buyouts of some of the things they hold dear and have instead decided to put in this museum items that are unique, old and valued historically.

At the museum, the tour guide will take you on a trip through 8 galleries all named for different periods of the slave era. From capturing slaves to chaining them to sending them abroad to abolishment laws to slaves returning back to Badagry.

The museum is very rich in culture, information and history. ]The heritage museum is a must visit if you are looking to see a part of the African Origin.

It is often said that the African story did not begin with slaves and this museum shows it. You will find the culture & records of the people who inhabited Badagry long before the setllers came and changed everything.

'We have divided the gallery into subdivisions, each showing how the slave trade started and its abolition' - Mr. Mike, Tour Guide

1st Gallery - The 'Introductory' Gallery - This galllery is the first one you come to just as you enter the museum. There is a statue of a man with broken chains with a 'Freedom at Last' expression on his frozen face. A big book containing pictures that show some parts of Nigeria's history is located just on a table in a corner in this gallery. In it, you will see pictures on Badagry, its founding era, its rulers, as well as some pictures of past rulers of Nigeria.

2nd Gallery - The 'Capture' Gallery - This gallery will definitely move you, almost to the point of tearss. It houses and displays chains, mouth muzzles used to hold captured humans captive all through their life from capture to death. There are pictures hanging that show real time frames of captured humans in this gadgets of captivity.

3rd Gallery - The 'Transportation' Gallery - This gallery shows how the slaves were transported from one place to another. You will also see how the slaves were fed(or hear what they were fed & how often). You will see a replica of a ship with an upper & lower deck. Captured humans & cargo often travelled together. A drinking pot with sharp edges marks the end of this gallery.

4th Gallery - The 'Equipment' Gallery - This gallery houses the original safe used by the colonial masters of the house before they left. It is said there are still documents, money and other important files remaining in the safe till date.

5th Gallery - The 'Resistance & Punishment' Gallery - What you will notice in this gallery as you enter is the display of love between a dog and a human lying on the floor. On closer look (and with the tour guides narration), you will come to understand that the dog is trying to bith off the throat of the human who is a slave trying to escape or is being punished for any number of reason. The slaves are divided into Field slaves & Domestic slaves. The Domestic slaves were the 'well to do' slaves as they lived in the masters house and did his bidding. Some got the opportunity to read & write for their masters even going on to managing their Master's slave business themselves while still remaining a slave under the master.

6th Gallery - The 'Industry' Gallery shows the bar racoons that housed the captured humans awaiting slave dealers from over the seas. A bar racoon is a room that captured humans are kept to wait for buyers. A ship surgeon inspects every slave its ship wants to purchase. The sound and fit slaves are separated from the unfit who they call Makrons After he declares a slave fit enough to be bought, the slave is branded(stamped) with the initials of the slave dealer or nationality to ensure slaves are not mixed up when they arrive in their destinations.

7th Gallery - The 'Integration' Gallery shows the way the slave dealers absorbed/adapted the slaves into their new environment to get the best out of them. You will see clippings showing live auctions & shippings.

8th Gallery - The 'Abolition' Gallery: In here, you will see the people who fought for the end of slavery. There are real heroes among the numbers you will see, including the woman who rescued 300 people without anyone dying. Slavery continued 100 years after it was publicly declared illegal/over.

There is a balcony where you get your first sighting of the Island of no Return. Ships came across the water to Badagry to pick up captured humans for slavery.

'A visit to the gallery is highly recommended on a trip to Nigeria & Badagry. You should also visit the Agia Tree while in town. Find other points of interest in Nigeria.'