If you can walk you can dance, if you can talk you can sing. ~Zimbabwean & Sudanese Proverb

Big News! Are you looking for something to do this Friday? Afropolitan Vibes is a year old! (The next edition is around the corner and we want to remind you what happend the last time & why you don't want to miss this edition.)
Afropolitan Vibes is a monthly live concert for alternative, Afrobeat, Afrofunk, Afro hip-hop, Afropop, and high-life music. You might wonder if this isn’t another way of saying African music, and while you’d be right, you’d be missing the point: Afropolitan Vibes is a platform for musical acts to express whatever given talent they have in a beautiful no-holds-barred manner.
Just think about it as venting through music or using real music to drive change in Nigeria.
Afropolitan Vibes started a year ago with a few friends and supporters who believed in the show’s future. The owners were warned about Nigerians and their disloyalty of not staying with anything long enough to see it grow. In fact, the stereotype is that Nigerians like things “readymade,” so they won’t wait for you to blow.
Afropolitan Vibes gradually overcame that challenge, though, as it began to win the hearts of Nigerians who are actually hungry for something passionate, real, and something that felt like home.
Fast forward to the night of the anniversary and the venue was packed full; someone passing by the nearby Broad Street would have a lingering question as to what was happening.
The surrounding area of Freedom Park was packed with cars, and once you got in to Freedom Park (after paying N200 at the gate), you could feel the excitement in the air: it was so contagious, lighting a match would have let loose an inferno. 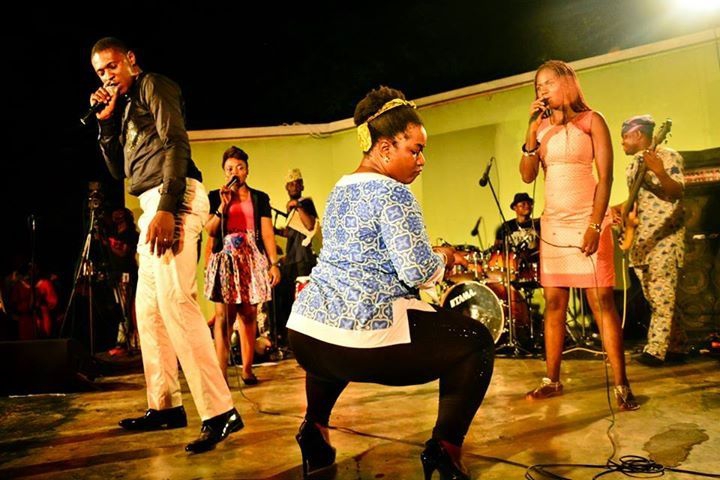 The amphitheater where the event was to take place was brimming with people (likely keeping space for their friends & loved ones who probably hadn’t left the office yet for the show).
Find more events on MyDestination Nigeria here
As the band performed last-minute checkups and warmed themselves up for the night, the audience did the same by getting popcorn and visiting the palm wine stand for freshly tapped palm wine to water their expectant souls. (More on the palm wine soon.)
Lights came onstage, and we cheered. Afropolitan Vibe was about to kick off!!!
Soon enough, Bantu got on stage and began to lead. It was a moment come true as finally the first anniversary was live and real. One could feel the joy of the band as they made sure they put in to their performance a new and inspired vibe to let you know that they didn’t come to Lagos to play.
The first headline performer of the night, Aramide, came on stage to whoots and screams from the women. Aramide is a female R&B singer who has come to represent the African woman and give her voice on what she sees, feels, and how she wants to be treated.
One of the reasons Afropolitan Vibes stands out is because of the harmony of the band. This is one of two shows (the other is OneMic Naija) that actually gets the performing artists to rehearse with the band before coming on stage to perform, removing the popular lip synching that is known to take place in Nigeria even among some “live shows.”
When Aramide’s performance was over, the band came on to return the audience back to a stable state. Then, Bantu asked the audience to come onstage and dance. This activity is one of the signature activities of any Afropolitan Vibes show. 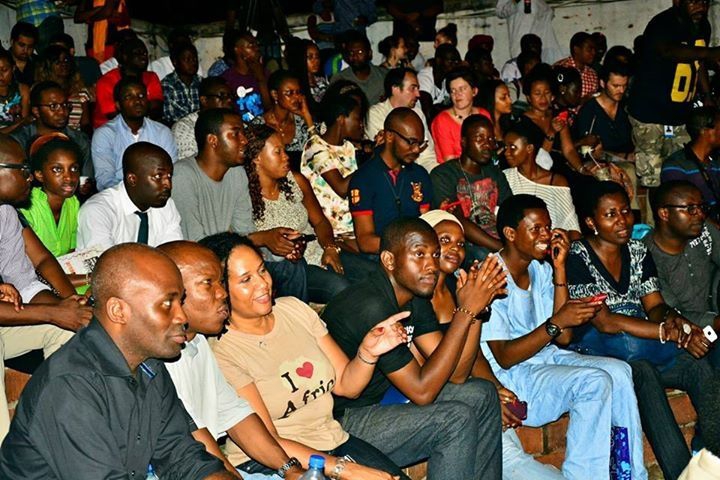 Trust Nigerians to be a little hesitant at first but as soon as the first person moved to climb the stage (the front of the stage was filled with fans by this time), a few people got onstage and danced.
Ghana’s FOKN Boiz are next!!!
FOKN Boiz being at Afropolitan Vibes (or in Nigeria) at all is a big deal, because one of their hit singles is “Thank God We Are Not A Nigerians.” Of course, they had some explaining to do — and guts — to come to Nigeria after such a song.
When they came on, it was lots of “heys” and “whoots” as they performed a song they had written with Bantu first. The song was new and so the audience was silent as they digested it. By the next song, they introduced their style of music, which they called “Gospel Porn.”
“Jesus Is Coming” was next but this wasn’t any ordinary gospel song.
The FOKN Boiz are not your average church duo singing about the heavens and chariots; rather, they are a deep, satirical, and inspired group who use their rap music to ask questions and tread where most Africans wont tread.
The next song they came out with was the one we had all been waiting for. “Thank God We are Not A Nigerians” drove the crowd into a frenzy even before the duo began the performance. In order to calm down skeptics who likely hadn’t heard the song before, the duo interrupted the performance and said they actually couldn’t remember why they wrote the song anymore as the same conditions plaguing Nigeria had started plaguing Ghana.

Identifying distinct cultural preferences between Ghana and Nigeria, the song exploits and pokes fun at the aforesaid differences and then focuses on the real issues that affect both countries. 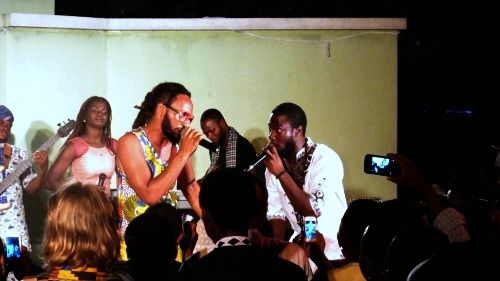 The next performer (and one people waited to see) was Sound Sultan. The Niger Ninja could fly in from the sky or come out in a frenzy of karate chops (Or so I expected).
Sound Sultan slinked in from backstage and appeared before the audience in a blink. Immediately, the audience chanted, “Suntan! Niger Ninja!” and he didn’t disappoint when he, threw the “A jo o da bi ile” (no place can ever be like home) line out and the audience responded. Sound Sultan later had his label mates join him on stage, and together, they provided a lively performance of “Bush Meat &The Hunter.”
We were sad to see Sound Sultan's performance end, but FOKN Boiz, Aramide, and the Bantu band hit the audience with some freestyles that blew the night away.
Afterward, the audience moved to central court in Freedom Park to dance the night away in the after-party.
About that palm wine: It is a welcomed treat at Afropolitan Vibes. The palm wine is tapped in the morning of each show from Badagry and brought to Freedom Park in big kegs, (heard tthe police tried to impound it). The palm wine is fresh and sweet owing to it just being freshly tapped. A gourd goes for N3,000 or N5,000 and is best enjoyed in the calabash.
Afropolitan Vibes will hold their next event on April 18th.
Follow Afropolitan Vibes on Twitter, Facebook. Check out previous editions on their Youtube page and see what is being said about #AfropolitanVibes. You can find more pictures on MyDestination Nigeria's Facebook page and Instagram.

See this video on Freedom Park; Lagos State's best kept secret. (Till we discovered it!!!)

See you at Freedom Park on Friday!!!